Circles of Rhythm Provided a drum circle for the staff at the Calgary Haworth location in September 2012.  It was very well received, even with the rolling of eyes at the beginning!  The following is an article that appeared in their internal global newsletter.  It was distributed around the world to their staff. 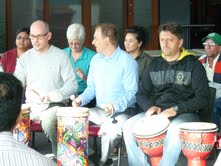 The drum circle, which is a metaphor for a well functioning team, was led by a facilitator from Circles of Rhythm. Fundamental elements that make a drum circle successful — listening, community, trust, balance, and creativity — are the same as those that contribute toward making any team or group succeed. 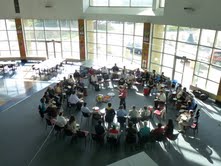 The interactive experience begins with the group assembling in a circle and learning to play simple rhythms on drums from around the world. Between rounds of drumming, the facilitator connects the drumming experience with workplace and life — such as the importance of understanding the expected team goals, how the part they play makes a difference, that listening is as important as playing, the challenge of establishing a rhythm together, and more. Questions are asked of the group to give them the opportunity to reflect on the lessons they’ve learned from drumming as a team that apply to life and their workplace.

“Prior to the experience, hallway comments overheard were ‘do we really have to attend?’, ‘some touchy-feely thing,’ and ‘really, 90 minutes?'” said Jim Thompson Goodchild, Manager, Walls Product Development. “But afterward, comments included ‘that was fun!’, ‘way better than I expected,’ ‘I want to get a drum,’ and ‘I thought it would be 90 minutes I wouldn’t get back, but that was really cool.'”

“It was a great team activity, and something that we should have members participate in more often,” said Francisco Delgado, AI Corrections Supervisor. “I felt great — and still do. The facilitator’s feedback and insights were inspiring.”

Calgary Human Resources Manager Jane Kindrachuk added “If any Haworth member has an opportunity to participate in a drum circle, we highly recommend it!”

For more information on Circles of Rhythm programs go to:  www.circlesofrhythm.com

SOLD OUT! Our ICDC Facilitation Training Weekend i

Are you on the journey of Personal Growth and Tran

Everyone, yes - EVERYONE is welcome to join us sta

We're Back! 2021 Drumming in the Park
YouTube Video UCMXXB9kAN3ZlFU4Fep0UEYQ_sf74bXE2eQg